It was December 2016. I was climbing Mount Hira in Makkah with my brother and my friend. At some point on the journey, my friend played the melody of ‘Mountains of Makkah’, A tune that took me right back to the days when my Mum would be driving me and my siblings to school, and the anthem would often play on the local Islamic radio station. This song was part of my childhood, and there I was, on a life-changing journey remembering this song that felt like home. And I'm not alone…you remember it too! ›

I was blessed with the opportunity to sit down with legendary Islamic recording artist, Zain Bhikha, on Zoom, to reflect on his incredible journey which spans almost three decades. I join from my home in grey Britain and Zain joins from his home in sunny South Africa. “I’m still getting used to doing things virtually!” he laughs.

“I have a small home studio set up here,” he says, referring to his surroundings. Zain tells me of how he and his family relocated from Johannesburg to Cape Town around one year ago. “We’re still settling in as a family but, Alhamdulillah, we enjoy Cape Town, it’s a lot more beautiful with the nature and the ocean and the mountains. So, Alhamdulillah, it’s been a life-changing opportunity for us.”

I notice a display of his published books showcased behind him. In awe of the breadth of how much he has achieved, I wonder if he’s used to seeing his name on his works. “It never gets old. Up until today – 25 years later, the barakah of it all…the opportunity that Allah can use you in a positive way beyond your wildest expectations.” 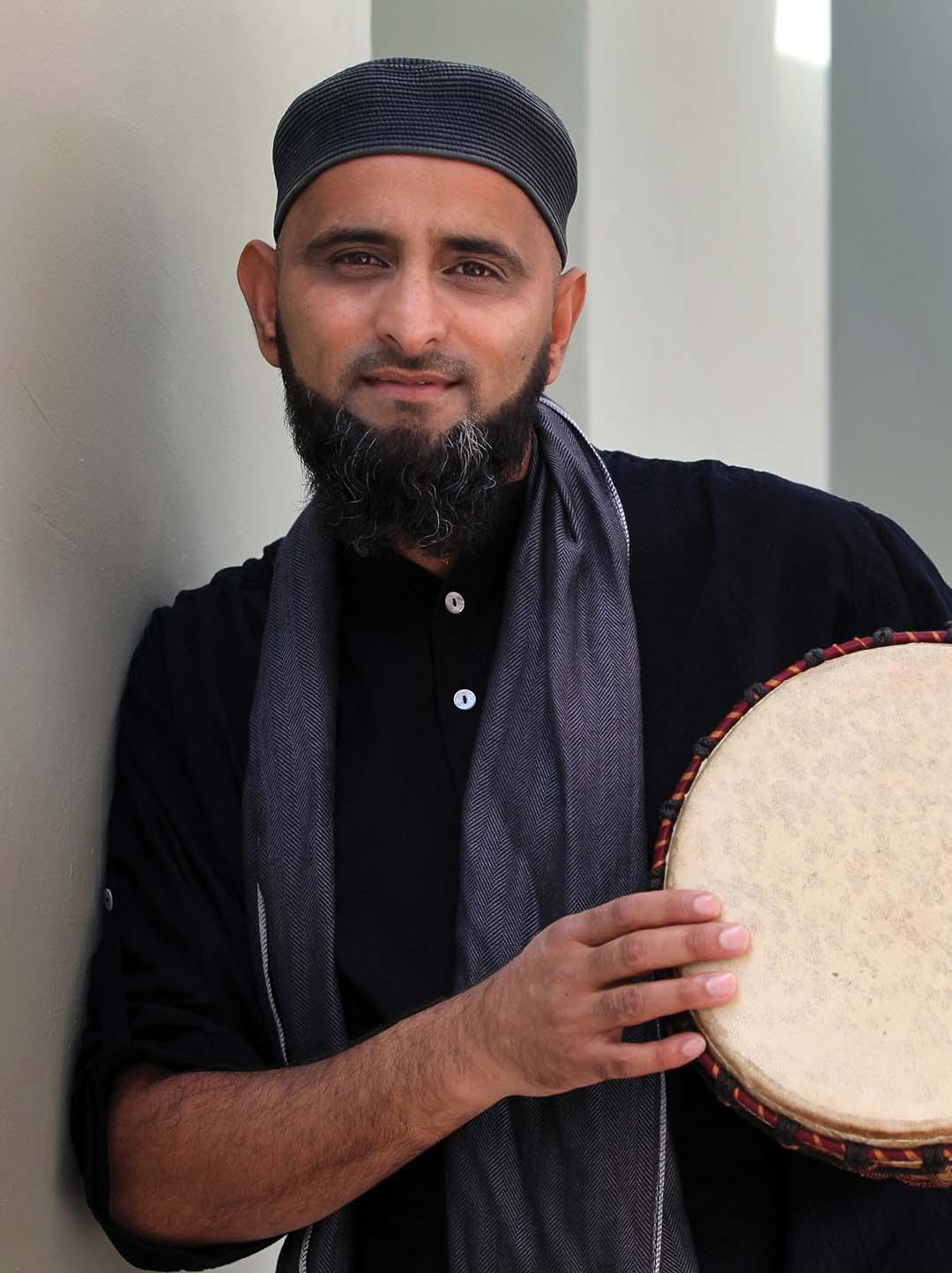 I, obviously, do not miss this opportunity to tell Zain of my experience in Makkah and how ‘Mountains of Makkah’ takes me right back to that sun-kissed morning on Mount Hira. “There was a lovely saying that someone said to me: ‘songs remind us of who we are and where we came from’, and it’s a very personal thing. It’s intangible. It’s a feeling that you get. Many people like you, who grew up with my songs, they remind them a lot of their family, home, parents…Alhamdulillah, I’m really just overwhelmed to be part of that. Almost a silent accompaniment to somebody’s life, and it’s such a beautiful thing.”

Despite being one of the world’s most celebrated nasheed artists, Zain reflects on his journey and recalls how, at the beginning, he wasn’t even sure if people would be interested in hearing his tracks. “A song like ‘Give Thanks to Allah’, I wrote so many years ago…a simple song. When I started, it was more about ‘can I do it?’ and I wanted to express myself.”

Like many fans that listen to Zain’s music to feel closer to their faith, it seems Zain produces his material for the exact same “yearning”. He reflects on ‘Give Thanks to Allah’, an earlier song he produced. At the time of writing, Zain was “going through a lot of issues” and “was trying to determine what the greater purpose of life was, and trying to re-connect with our Creator.” 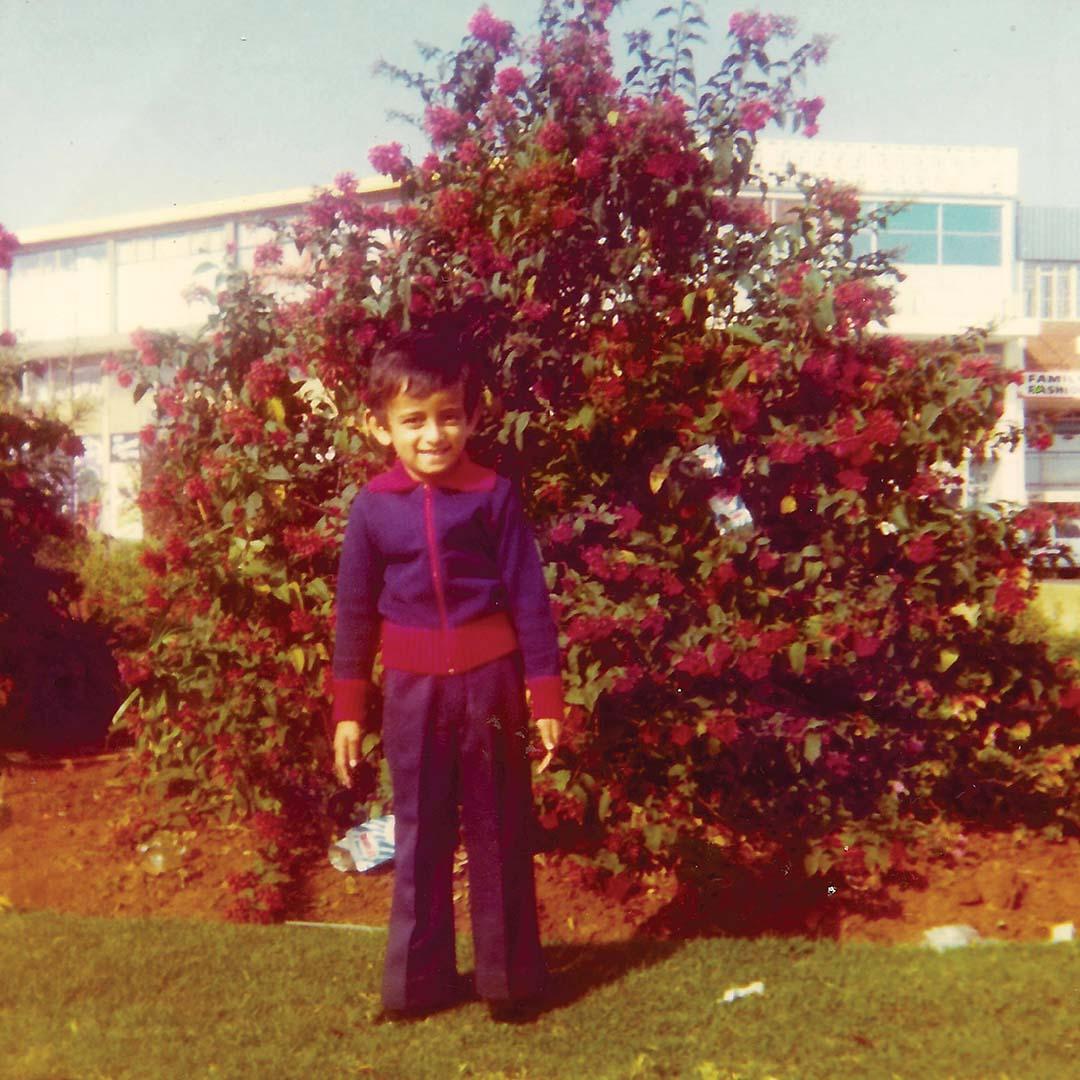 This seemed to work. As Zain began to practice more and more, he was blessed with the opportunity to perform the once-in-a-lifetime Hajj pilgrimage. Previously when in Makkah, he had spent time writing songs which praised the Prophet (saw) and Allah (swt). For example, he had written ‘Mount Hira’ whilst in Makkah. Unlike his previous Umrah experiences (of which there had been a few), Zain tells me he promised himself “no songs”, as he would aim to focus solely on his Hajj, and his “own salvation.” This changed when Zain happened to share an elevator with an elderly gentleman. “He turned to me and said, ‘can you do me a favour?’, and I was like ‘sure, can I help you?’ He said ‘while you are here, can you please write a song about Medina?’, and that gave me the permission.” This encounter seemed to be part of an “immense plan”, and Zain has no doubt that Allah was guiding him to continue writing whilst on his pilgrimage. Thus, Zain wrote many tracks whilst in Makkah and Medina, including ‘City of Medina’, ‘The Journey’, and more from his 2006 album, ‘Mountains of Makkah’.

It is evident to me that Zain holds his parents in the highest regard, as one should. Whenever he speaks of them, his face lights up and it’s clear that he owes a lot to them. In fact, he credits his mother and father for “liberating” him by allowing him to nurture his artistic talents, something which he states most parents in his community whilst growing up would not allow.

It was Zain’s father who gave Yusuf Islam a cassette that his son had produced. When Yusuf was working on his ‘A is for Allah’ official songbook, he had invited Zain to record the song. Now, Zain’s voice was to be propelled beyond the borders of South Africa and echoed across the world. Working with Yusuf also meant that Zain met Dawud Wharnsby, a friend who remains close to him to this very day. The conversation surrounding Yusuf Islam and how he helped kickstart his nasheeds career still brings a smile to Zain’s face, decades later.

Zain tells me that his father had advised him not to make music his sole source of income. While he did indeed pursue his artistic interests, that didn’t stop him also working full-time and having a successful career as the CEO of a pharmaceutical company.

I ask Zain about a beautiful, intriguing line from his 2002 track, ‘Time’, and he beams at the reference of a song that is “so special” to him. Zain explains how, when he wrote the song, in 1998, he was going through a lot of changes. He was driving past the school he used to attend, and the field in which he used to play as a child. “Time is so relative,” he ponders. “Like a dusty window pane, we see our past, but we don’t see specifically. Allah speaks about time, we always as human beings are going to be at a loss when it comes to time. It’s so fragile, like butterfly wings. The best we can do is make the most of every moment and every person that we meet. And then move on, but keep what you’ve learned from the past.” 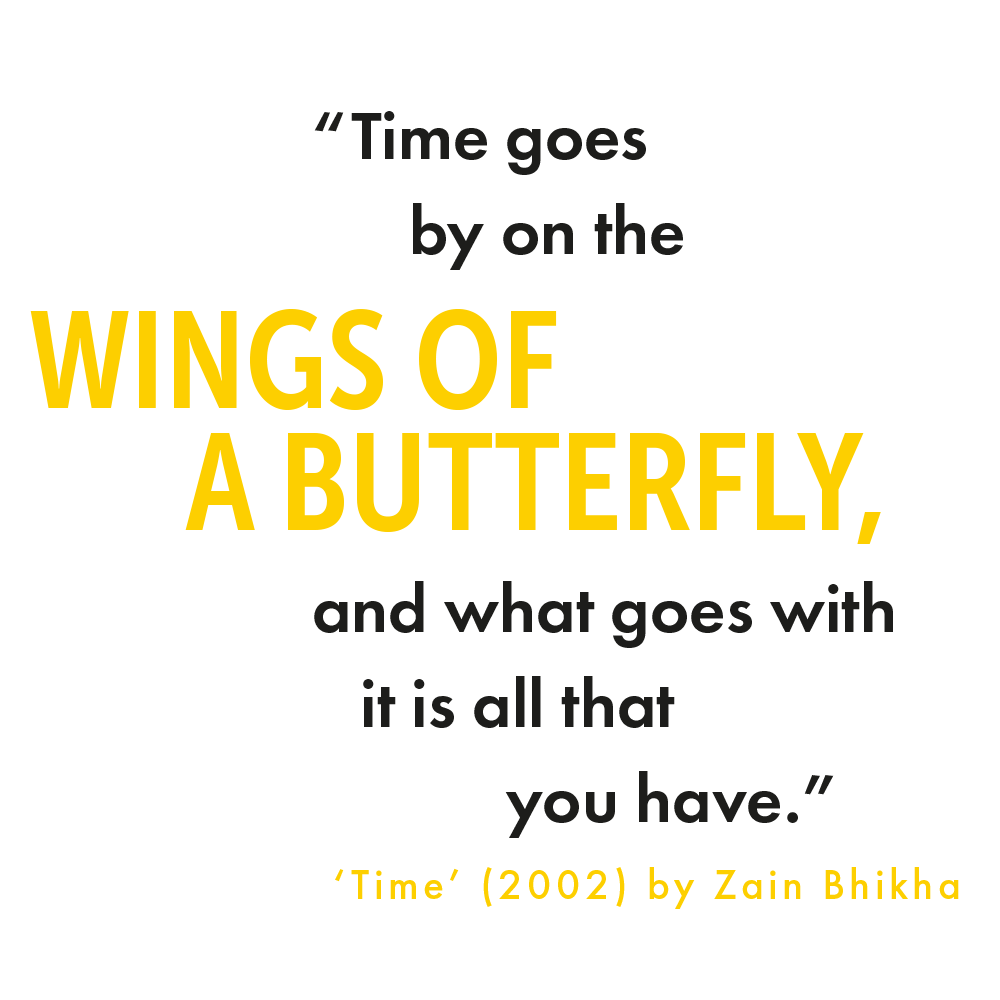 We talk further about the notion of time. As Muslims, Zain feels we can utilize our time well. He considers the thought of the modern world getting lost in media and screens, and that getting closer to Allah is experiential. Whether we lose somebody, or are blessed with an experience like Hajj, he says that it takes time to connect to our Maker, and this generally happens through experiences. Zain explores that our lives, from an Islamic perspective, are based on appointed times, so we must “create a balance for ourselves”. He mentions salah and Ramadan, which are bestowed upon us at certain times that come around consistently. “The Prophet (saw) was so disciplined in whatever he did. It goes against the freedom that people propose in today’s world, but ultimately, being a Muslim is surrendering what we want for what Allah loves and what Allah expects from us. And that’s when we find the real freedom.”

In his 2011 album, 'Hope', Zain recorded a track titled ‘Heal the World’. When asked what we can do to help achieve world healing, Zain advises to give sadaqah, lillah and zakat. “There’s no greater joy that you’d feel when you do something for the pleasure of Allah and you do something that will help another human being on earth.”

Zain Bhikha Studios was established as a not-for-profit, a waqf that operates from donations and investments. Zain, even after all the years of success he has been blessed with, tells me it still feels like a passion, rather than a career, and he cannot take credit. He acknowledges Allah (swt) as the One who gave him the gift of his talents. “What better way to celebrate a gift than to praise the One who gave it to you?” smiles Zain, in gratitude.

As we wrap up our reflection on his remarkable life so far, I’m curious of what we can expect from Zain Bhikha this year.

As bedtime has been an important aspect of Zain’s own parenting journey, he tells me that he is working on developing an app for young parents and their children, and how they can deal with bedtime.

Story time is also something Zain holds very dearly, so we can look forward to a new series of songbooks, including ‘Everything Belongs to Allah’ and ‘The Monkey, the Cow and the Wolf’. A division of Zain Bhikha Studios, ZeeBeeKids, will also see the launch of a brand new animated series – another thing for his young fanbase to look forward to.

And that's not all, on the horizon is an album that is “different to what [he’s] done before”, composed for a mature audience. We’ll hopefully be hearing some singles this year, in the run-up to its release.

On a personal level, Zain is looking forward to Ramadan. “Leading up to the blessed month, we’re always afraid of how we’re going to adjust our bodies to stay without food and drink. Once it starts, you suddenly get into a beautiful routine and are surrendering to Allah.”

With lots to look forward to this year from Zain, I’m excited to see what 2022 will bring for him.

Follow Zain on Instagram @zainbhikhaofficial and be sure to stream his discography on all major streaming platforms! 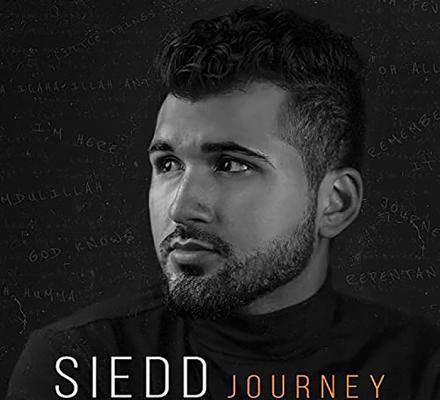 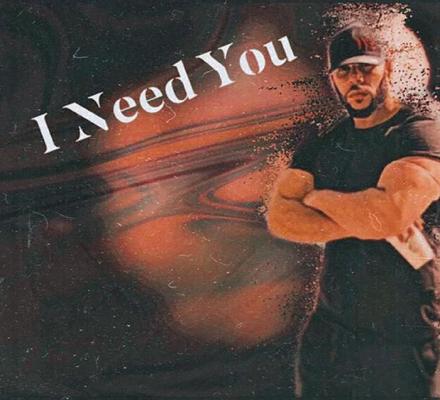 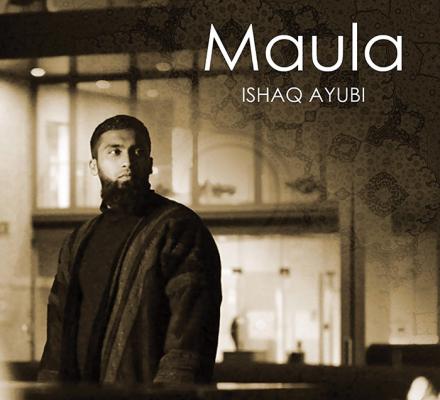 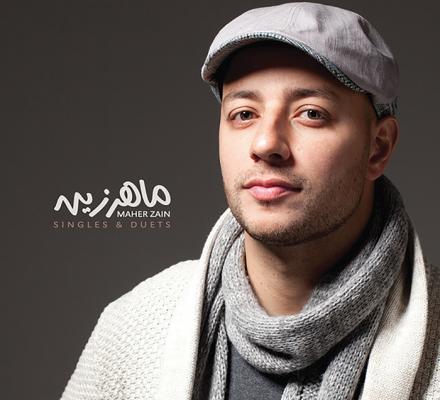 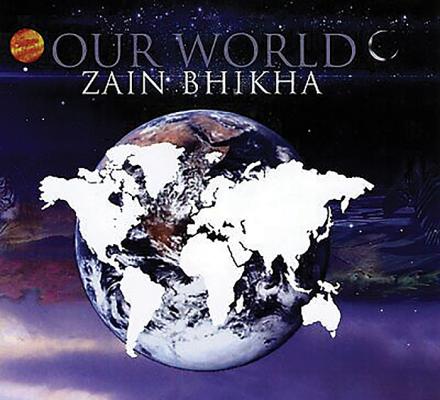