On the 27th of February 2020, the Ministry of Hajj and Umrah announced that there would be a temporary suspension of Umrah until further notice. Subsequently, the same council announced on the 31st of March 2020 that for Muslims wishing to travel for Hajj to wait until there is more clarity on the situation. For those that already made plans for Hajj in 2020, they are being advised to reconsider their plans and postpone till the following year.

Since then, Saudi Arabia has announced that they will not allow international visitors for Hajj and limit the number of pilgrims that are residents of the state.

Covid-19, a life-threatening virus, has swept through the world claiming over 300,000 lives and infecting almost 6.5 million people. The virus has caused disruptions worldwide to our daily lives and major events like Ramadan, Eid and Hajj. This year, there is a chance that Saudi Arabia may not allow entries for Hajj but instead put all their efforts into fighting the virus.

This would not be the first-time pilgrims have not been allowed to perform Hajj. In A.D. 967 an outbreak of the plague resulted in a cancellation of Hajj, multiple cholera outbursts caused numerous disruptions throughout the 19th century and most recently, the development of MERS (Middle Eastern Respiratory Syndrome) resulted in the sick and elderly being advised against travelling to Mecca for Hajj. Let’s not forget the numerous battles and attacks that took place in the Holy city like the attack of the Qarmatian tribe who killed tens of thousands of pilgrims and stole the Black Stone (the first stone laid by the Prophet Ibrahim AS when building the Ka’aba) which led to a suspension of Hajj for many years that followed.

More than 2 million Muslims perform Hajj every year. Hajj is the holiest of pilgrimages that every Muslim is obliged to carry out at least once in their lifetime. It is one of the five pillars of Islam (including Shahada, prayer, giving alms, and fasting) and is completed in the last month of the Islamic calendar, Dhul Hijjah. The rituals of Hajj reflect the actions of Prophet Ibrahim AS and takes pilgrims through Holy sites in Mecca like Mount Arafat, where the Prophet Muhammad gave his last sermon and Prophet Ibrahim AS made his sacrifice.

On the 10th day of Dhul Hijjah, the first day of Eid al-Adha, it is customary for pilgrims to sacrifice an animal in remembrance of the Prophet Ibrahim AS for the sake of God. Ibrahim AS had a dream in which he was told to sacrifice his beloved son Ismail, but when he reached the top of Mount Arafat to do so, God replaced Ismail with a ram. This was a trial sent from God to test the Prophets devotion to The Almighty. Eid al-Adha is known as the ‘Festival of the Sacrifice’ for this reason.

Just like Hajj, Qurbani 2020 will be affected by the pandemic.

Coronavirus has not just infected humans, but animals too. The risk of infection between humans and animals has had a huge impact on farmers and those that look after livestock. With many countries still under strict lockdown rules, sourcing meat is challenging. Farmers have been unable to sell their animals due to the risk of infection and restrictions on movement. Those that work on farms, and many more in other areas of work, have no job or source of income for the same reasons leading to higher rates of poverty and extreme hunger.

Despite the challenges faced by Covid-19, Qurbani will still be delivered to the poor and needy. For those who might not be able to perform Hajj this year and fulfil their qurbani in the Holy city of Mecca, they can still give their qurbani through charitable organisations who will distribute it on their behalf.

We will still give your Qurbani

Eid al-Adha is the one time of year where poverty-stricken families can be part of the festivities and enjoy the luxury of having meat. Giving qurbani to widowed mothers means that they will feel a sense of security during this unsettling time, knowing that their children will have a decent meal.

With the price of food items like rice and flour going up as a result of a ban on the movement of goods within countries and across borders, there’s rising concern over the health of already vulnerable children. Widowed mothers and their orphan children are at a greater risk of starvation, malnutrition and even death during this global crisis, which is why it more crucial that we continue to support the most vulnerable in underdeveloped countries.

Give your qurbani to an orphan or widow. 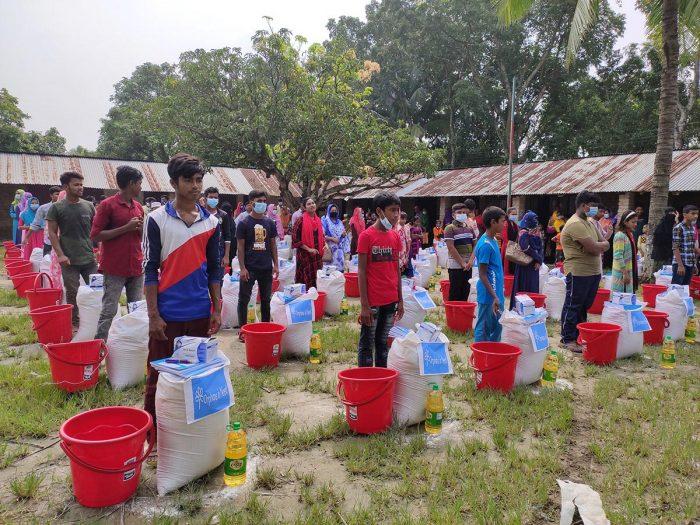